The 1d yellow ochre machin definitive stamp had quite an interesting career. There are many varieties to collect: from counter sheet examples to booklets and coils; and from different phosphor bands to different head types. So where does one start with such a plethora of varieties? As with a lot of cases, it is best to start at the very beginning. 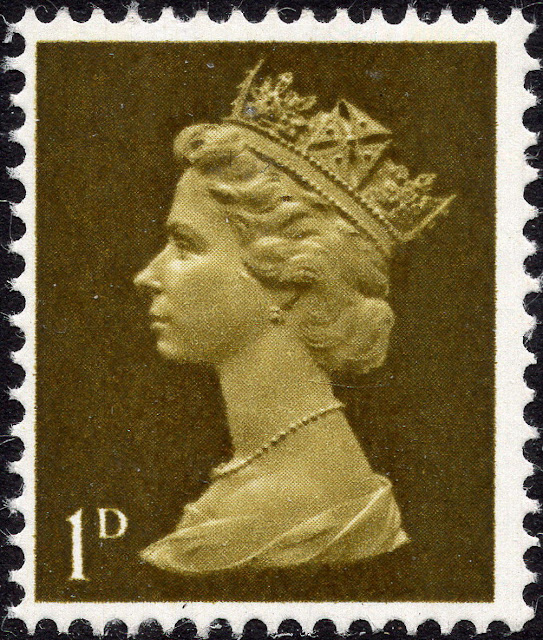 The 1d first appeared on 5 February 1968 in the form of post office counter sheets. It was printed in photogravre. And it had one distinctive feature which set it apart from all subsequent 1d iterations. This first  printing of the 1d was the only one possess what we now call Head A. All subsequent printings of the 1d had a different head style, known as Head B. So what is the difference between A and B? To make things easier, I've created an  illustration to explain the differences.

If you look closely at the bases of both head types, you can see that Head A has base that is quite flat. Now let's turn our attention to Head B. As you can see, the base of this head type is more rounded in comparison. So now we know the difference between Head A and Head B.

The second printing of the 1d was issued 11 March 1968. As with the first printing, it was issued in counter sheets. Unlike the first issue, this iteration of the 1d was printed using Head B. It should be noted that on this same day, Royal Mail also issued the 1d in vertical coils. These coils also bear the Head B type. These coil stamps can be differentiated from counter sheet examples by studying the vertical perforations to the left and right. These perforations will be machine cut as opposed to the torn perforations found on counter sheet stamps.

Now that our minds are spinning, it is probably a good idea to pause, to ruminate, and to digest all this new information. In my next blog I will delve into the intricacies of 1d booklet stamps.

Email ThisBlogThis!Share to TwitterShare to FacebookShare to Pinterest
Labels: *I Focus..., 1968, 1d

Where in the World